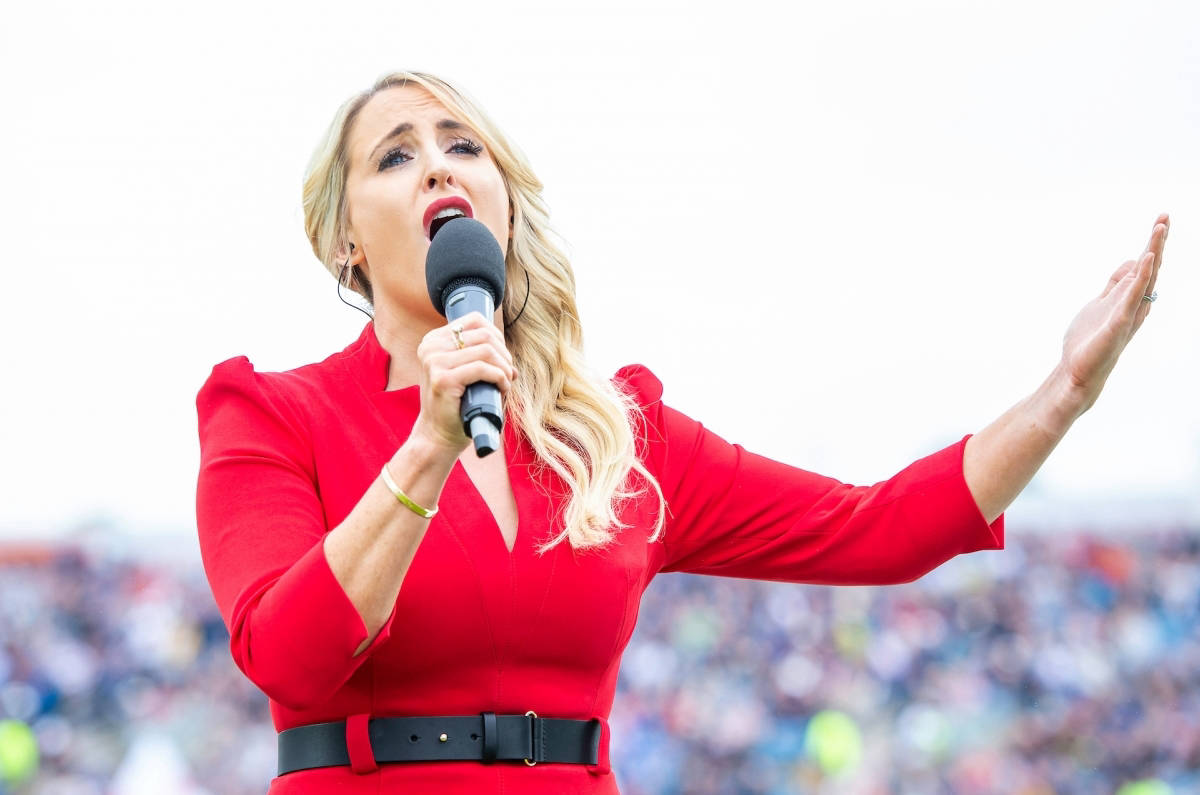 The countdown is on to Rugby Leagueâ€™s big day at Tottenham Hotspur Stadium on Saturday 28 May â€“ and the RFL today confirms Lizzie Jones MBE and Alex Simmons as part of a packed programme of music and entertainment.

Lizzie, who will forever be linked with the Challenge Cup Final after her moving performance at Wembley in 2015 only months after the loss of her husband Danny during a League One fixture on White Hart Lane, will return to perform at the Cup Final â€“ just as she did two years ago in the absence of fans because of the pandemic.

â€œItâ€™s going to be very different this year,â€ says Lizzie.

â€œSinging at the Challenge Cup Final is always so special, but itâ€™s the fans who create the atmosphere which makes it such a unique occasion. It just wasnâ€™t the same in 2020, despite the amazing efforts of the players and everyone else involved.

â€œAnd of course, this year the final is at a new venue, which looks absolutely amazing â€“ Iâ€™m so delighted to have the chance to play my part on a historic day for Rugby League at Tottenham Hotspur Stadium.â€

Lizzie will be supported by a military brass band to reflect the tradition of Rugby Leagueâ€™s oldest knockout competition, as well as the Liverpool Signing Choir - a visual, diverse and inclusive choir promoting deaf awareness by performing songs through sign language.

Meanwhile Alex Simmons, whose larger-than-life personality is familiar to League fans through his work on Rugby AM, has an extra reason to relish his role as the in-bowl DJ for the day.

â€œIâ€™m a massive Spurs fan and I canâ€™t wait to be part of a Rugby League occasion in the best stadium Iâ€™ve ever been to.

â€œItâ€™s the mecca for me - Rugby League fans are just going to be blown away. The atmosphere is intense, the seats are fantastic, and everyone knows about the bars and the restaurants â€“ wow. Itâ€™s like a spaceship has landed in Tottenham.

â€œI know a lot of people in Rugby League will associate me most with Rugby AM, but Iâ€™ve been a professional DJ for 23 years â€“ since I was 17 years old. Youâ€™ll hear everything, from house music to singalongs â€“ Iâ€™m just going to edit them to keep that energy. Get yourself down there early and enjoy the day.â€

Tickets are available here, from only Â£30 for adults and Â£15 for under-16s, with hospitality packages also available â€“ but they are selling fast, with only a handful of Category 4 tickets now available.

Mark Foster, the RFLâ€™s Chief Commercial Officer, adds: â€œWeâ€™re proud to announce that Lizzie Jones MBE and Alex Simmons will both be part of an historic Betfred Challenge Cup Final Day at Tottenham Hotspur Stadium â€“ which is now less than two months away.

â€œIt will be the first May Final for decades, and the draws for the Quarter Finals of the Betfred Challenge Cup â€“ and the Semi Finals of the AB Sundecks 1895 Cup â€“ give us some idea of the exciting line-up of clubs who could be there.

â€œWeâ€™ve already been delighted by the response of supporters from Rugby League and beyond to our move to Tottenham in 2022, and the momentum is really building. It promises to be an unforgettable, unmissable, occasion.â€