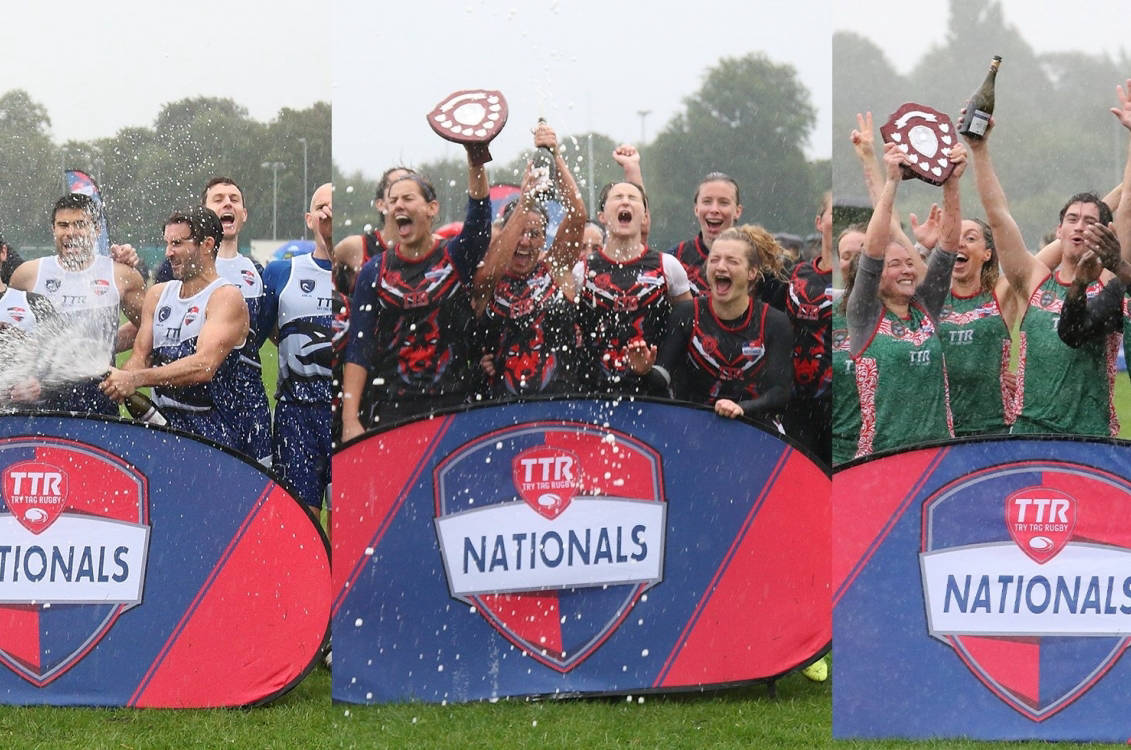 After a year off in 2020 due to Covid, the UK Tag Nationals event made a return on Saturday 2nd October with the third annual event taking place at Kings House Sports Ground in London.

In a direct contrast to the weather in 2019, when there was glorious sunshine all day, this yearâ€™s event saw torrential rain for most of the day. Despite the weather, it didnâ€™t stop some top-class Tag Rugby being played nor did it lessen the pride and passion on show from the players as a great day was had by all.

The event saw a record 32 teams from the 10 different Try Tag Rugby regions around the UK come together to battle it out across mixed open, menâ€™s open and womenâ€™s open categories to see which region would be crowned the UK Tag National Champions. Included in the teamâ€™s taking part was the events first ever invitational team, with the TagBoks UK team competing in the mixed category.

Despite some great advances and progress being made by a number of regional teams, it was once again the London regions taking home the spoils.

The first of the finals was the menâ€™s open category between East London Eels (3rd in 2019) and the Yorkshire White Roses (2nd in 2019). Having met each other earlier in the day during the pool stages, when Yorkshire White Roses won 2-1, the final was always going to be a tight affair. East London eventually pulled away to overcome their earlier loss and to beat Yorkshire 3-1 win in the final. Despite the disappointment of being runners up for a second event in a row, the team will surely take great pride in going the whole tournament undefeated, except for the final. Their performances and 2nd placed finish also further enhancing the Yorkshire teamâ€™s reputation as one of the countryâ€™s top sides and showing their 2nd place finish in 2019 was no fluke.

In the Womenâ€™s Open Category, one of the stories of the day was the performance of the Manchester Worker Bees Team. Having finished bottom in their first ever event back in 2019, they showed real improvement and some great team spirit to put up a great fight against some of the London teams they faced. They will also be happy to have taken the scalp of their neighbours from across the Pennines with a 3-1 win against Yorkshire White Roses in the pool stage. Bristol Brabazons also looked to show good promise for the future with a mid table finish in their first ever UK Tag Nationals. The final however was again an all-London affair and was yet another close game with only one try separating the teams. West London beating East London Eels 1-0, a team that had beaten them in the days earlier pool stages.

The planning for the 2022 event has already started and we hope all those involved this year will join us once again.

Thank you to all the players for putting on a great show of Tag Rugby at this yearâ€™s UK Tag Nationals, despite the rain. A big thank you also goes to all the regional managers and volunteer coaches who have helped their regions teams prepare and take part in the event.

More than ever this year, we would like to thank the referees, staff and partners for their involvement and to pay an extra special tribute to them given the testing weather conditions.

Thanks to PSS International Removals our official referee partner, who also provided a Â£100 amazon voucher for referee of the tournament, Gareth Howell from Bristol.

'For full details of the winning teams and individuals as well as final placings please click HERE.