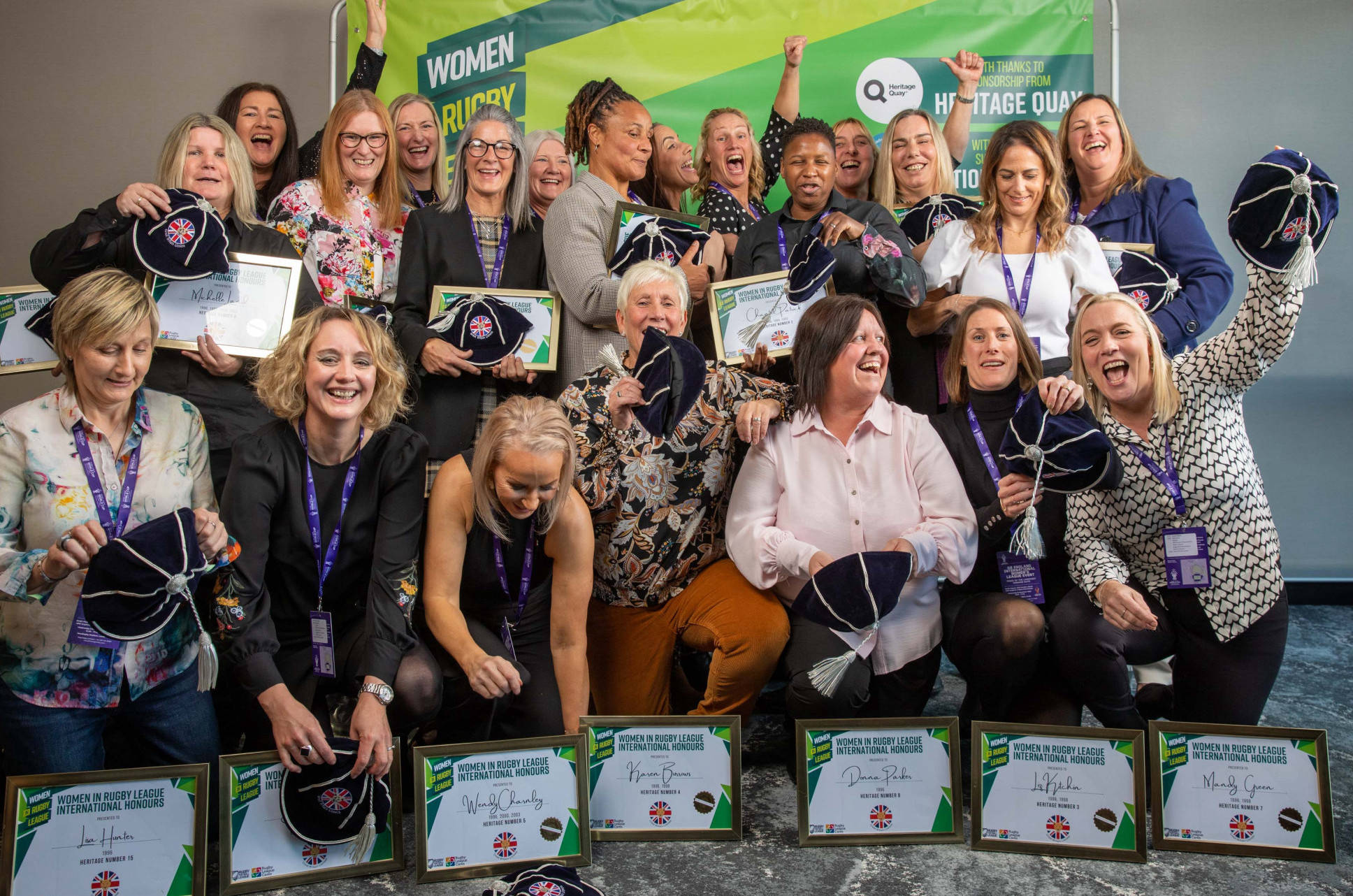 As England Women celebrated a win in their Rugby League World Cup fixture against Papua New Guinea on Wednesday evening another landmark occasion was also being marked at Headingley Stadium in Leeds.

Over 400 people gathered for a special Rugby League Pride of the Lionesses event which recognised women who have made outstanding contributions to the game.

The event honoured over 100 former GB and England Lionesses, who played in the 1990s and early 2000s.  They were presented with their caps and heritage numbers, for the very first time, by former Lioness, and member of the Women’s Rugby League Hall of Fame, Brenda Dobek, and former GB coach Jackie Sheldon.

The event was supported by BBC sports reporter Tanya Arnold, and introduced by Clare Balding CBE, President of the Rugby Football League.

Fans had the opportunity to rub shoulders with former Rugby League internationals such as Brenda Dobek, Lisa McIntosh and Sally Milburn who have recently been inducted into the RFL Women’s Rugby League Hall of Fame.  Several former players, including Sandra Wade, originally from Barrow, flew all the way from Australia and New Zealand, where they now live, to attend the event.

The Pride of the Lionesses event was the life-long dream of former Rugby League referee, Julia Lee, who set up a heritage project called Life with the Lionesses’ earlier this year.  The project aims to engage with the wider community, both inside and outside of Rugby League, and to deliver a programme of activities that will celebrate the history of the women’s game.  In addition, it is showcasing the achievements of women involved in Rugby League and using the stories of rugby’s women pioneers to inspire new generations.

“The Pride of the Lionesses Dinner was a fabulous event with everyone, finally, getting the recognition they deserve,” said Julia.

“These women are the pioneers of women’s Rugby League and have truly paved the way for the young players of today.”

At the event 71 former GB, and 43 England players received their caps and heritage numbers.  In addition 12 dual internationals, who played for GB and England each received two caps.

Lisa McIntosh from Halifax, one of three players who were recently inducted into the Women’s Rugby League Hall of Fame, said:

“We are thrilled that the RFL are recognising our international achievements. We loved our time playing for GB, and made huge sacrifices and commitments in order to play rugby league. This event will honour over 100 women who had been written out of history.  It is an important historical event for all of us.”

“This event was a long overdue opportunity to rebalance the scales. Built into the Rugby League World Cup schedule, it was a chance to celebrate the achievements of those women who previously went unrecognised and also acknowledge their role in bringing the women’s game to where it is at this moment in time. A great, and fitting, occasion of which it was a privilege for us all to be part.”

The event included recognition of the role of non-players who were awarded the RFL Roll of Honour by Bradford South MP, and Chair of the All Party Parliamentary Rugby League Group, Judith Cummins.

Jackie Sheldon, a former coach and women’s Rugby League development officer from Castleford;  trailblazing sports journalist Julie Stott, originally from Morley in Leeds, who cut her teeth at the Rothwell Advertiser and Dewsbury Reporter;  Sue Taylor, from Huddersfield, an unsung hero of Community Rugby League; life-long Press Association Rugby League reporter Ian Laybourn from Holmfirth; and former referee Julia Lee were all recognised for their pioneering contribution across Rugby League through recent decades – whether in refereeing, campaigning, coaching, journalism or administration and volunteering with a specific focus on the community game.

There was also a chance to see the Life with the Lionesses exhibition which showcases the personal journeys of the women pioneers of international Rugby League.  Visitors could follow their groundbreaking journey on and off the field and see their stories and experiences brought to life, from fundraising their own tour to playing on an equal stage with their male counterparts in this year’s World Cup.   The exhibition stays in Leeds until 13 November, then it moves to York and then Wigan .

The Life with the Lionesses project, is funded by the National Lottery Heritage Fund and runs over the next  three months.  Julia is working alongside Rugby League Cares, the Rugby Football League, the Rugby League World Cup 2021 and Heritage Quay at the University of Huddersfield to build a permanent public archive.  Activities are focussing around Huddersfield, Hull, Leeds, St Helens, Sheffield, Wakefield, Warrington, Wigan and York.