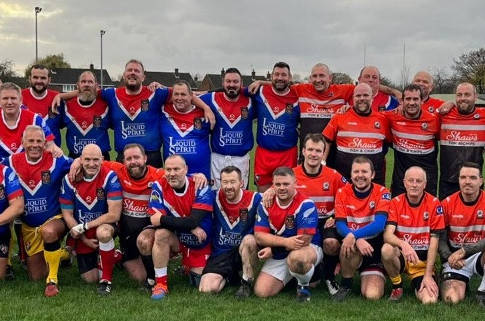 Castleford Masters were the hosts for Dodworth Masters first ever game last weekend.

“That was fantastic! I never thought I would play Rugby League again at my age, but now I have and I can’t wait to play again” was the reaction of 53 year old Daren Lang as he reflected on the game.

Dodworth Masters was born just a few months as Stephen Moss, who had played some Masters at Eastmoor, started to coach juniors at Dodworth. Stephen decided to get some of the older lads and parents out to play touch and pass and then proposed the Masters team. The Dodworth team arrives with subs and with five players who had never played before.

With hosts Castleford Masters, playing some excellent Masters and looking after the new lads, the game was a great exhibition of Masters Rugby League.  The Dodworth players although apprehensive prior to the kick off struggled at times with the Masters modifications at times, played the game in wonderful Masters spirit. For the record, Shaun Wragg was the Dodworth Masters of the day and Barry Nathan took the award for Castleford,

After the game and the traditional beer and food, Stephen Moss was still on a high. “The lads loved it. They can’t wait for the next one”

Dodworth Masters train by playing touch and pass on a Monday evening. All new players are welcome to go along. Email Stephen Moss for details mossryan1@hotmail.co.uk.